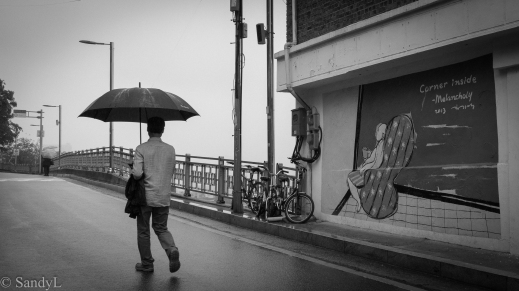 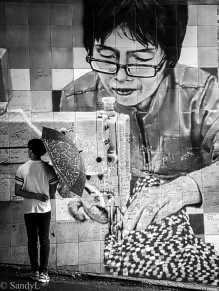 In the north east corner of Seoul, beside the old city wall on Naksan mountain there’s a quaint little village called Ihwa.  In the Josean era this area used to be grand, a fortress locality for the new capital. But the times peaked and declined and by the end of the Korean War it was a derelict shanty town. In 2006 the Ministry of Culture & Tourism established the Naksan Art Project, an initiative to re-invent urban areas into arts and culture friendly environments.  Ihwa was selected for revitalization by painted murals and art installations.

The Ihwa Mural Village is a popular but not so well known tourist spot. On TripAdvisor it is #53 of Things to Do and it is not even mentioned in my Lonely Planets Korea guidebook.  I forget how I’d stumbled across it.  Maybe I did a search on “quirky Seoul” or “alternative sites that are not castles, palaces and museums.” Suffice to say I found it and on a dark and overcast morning, I headed out to Hyehwa Stn on Line 4. 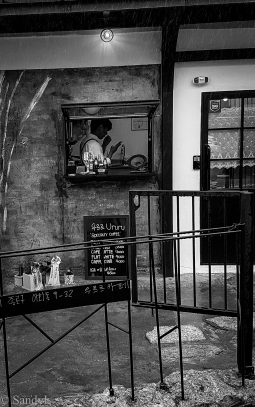 The village is tucked in high on the mountain side.  My Google search hadn’t quite prepared me for the climb nor for the unmarked route through a clubbing district, up a hair pin road and around a sprawling hilltop park.

The rain had degraded into a drizzle and cloudy skies obscured scenic views of the city. On a sunnier day the mural village would have provided cheery photo ops.  I had one.  But mostly my pictures were somber, black and white super-impositions of life and art.

Life is not always cheery. Sometimes we have to stand in the rain and look in to the window of someone else’s warmth.