Hubby likes bridges. When we went to Hanoi, his top place to visit was Long Biên bridge. It’s an historic bridge crossing the Sông Hồng (Red River)  and connecting Hanoi to Haiphong. It was built in 1903, in what was then French Indochina. When it opened it was the longest bridge in Asia and a spectacular example of large scale cantilever bridges.  It was designed by Gustav Eiffel, the engineer best known for his landmark structure in Paris.

Of course, I knew none of this when I first saw it. I was more taken by (and cautious of) the constant stream of traffic traversing the bridge.  In Vietnam motorcycles and pedestrians share common pathways and walking across the bridge really meant hugging on to the sides. 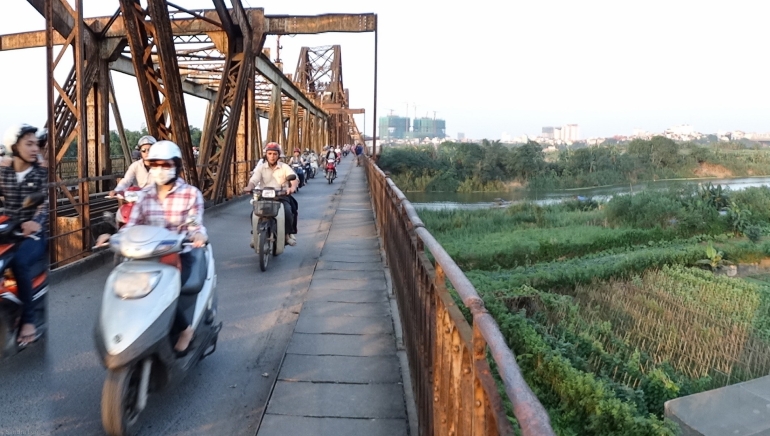 While hubby photographed the bridge structure, I looked at the tidy squares of plotted land reclaimed by farmers on the river banks. Neatly staked beans grew alongside broad leafed tubers and ‘choy’-type vegetables

On the water, an itinerant  fisherman tended his houseboat. In northern Vietnam this was a common enough sight, where people opted out of crowded cities to live on the water. 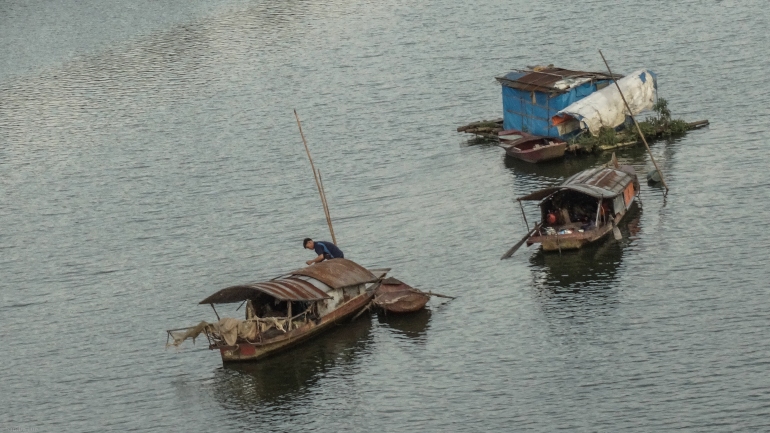 On the land side of the bridge I was enveloped by the heady scent of pineapples.  Tons of fresh fruit were being unloaded from a cavalcade of dump trucks.  This narrow strip of road was the beginning of the Long Bien market and it was clearly pineapple delivery time. By this time, Hubby had had his fill of shooting the bridge.   I’d had mine too and even though I had no pictures of the bridge itself, I had enough sights, sounds and smells to remind me of the life around it.