If you’re a fan of Street then you’ll know that the  #1 Fear of all new and no-so-new street photographers is the Fear of Strangers.  We all have a natural shyness about approaching strangers.  But if you’re like me, who believes that the only interesting street shot is one with a face in it, then you’ll figure out how to overcome this.

I admit that its easier to take street portraits when travelling abroad. There’s a comfortable camouflage in being a tourist. With hat, camera and obvious unfamiliarity with the language it’s easy to smile, point and share pictures on your camera.  Couple that with a few key words for beautiful, “Linda!” , “Bonito!”, “Muy hermoso!” and you have the magic for engaging with a stranger and making portraits. 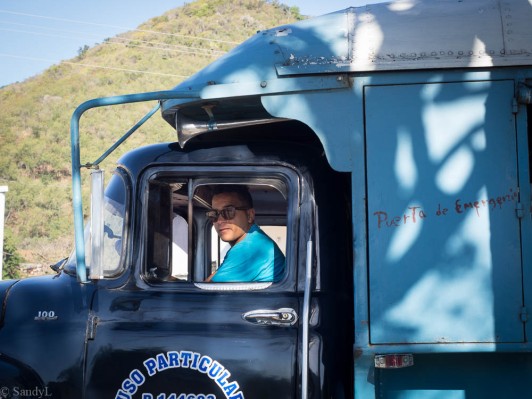 Initial shot taken from a distance 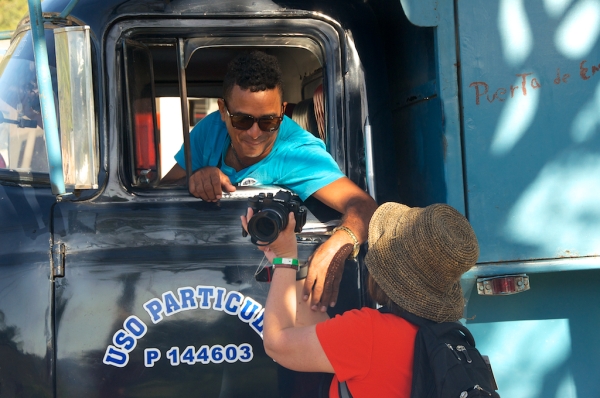 My favorite shots are those that capture an expression that hints at the personality.  Most of the time, I find it after after the initial photo, when I’ve come up close to share his/her picture on my camera’s LCD. The subject is now relaxed and I’m close enough for a very personal portrait shot.

If helps of course, to know a few more words of the language.  That way, I can walk away with a bit more knowledge of the person.   Granted, the knowledge may be incomplete and probably wrong (there’s a direct correlation between language proficiency and understanding) but at least I  have something more to remember him/her by.

The Cable Guy’s name was Alejandro (or maybe it was Guillermo.)  I’d been admiring his sturdy red truck. This being Cuba it was a solid, all metal 1960’s era vehicle, reconstructed from parts and a chimera of brands & manufacturers.  Alejandro was in the telephone cable business, he hauled telephone poles, dug & installed them … or so I understood.

Ramon the Guitar Player serenaded me with Cuban ballads played on his front porch.   He told me a long and involved story about his time in Santiago (it could have been Havana) where he met other chinos like me.

The Man in the Blue Box Balcony (sorry I don’t remember your name) was relaxing on his day off.  He asked me if I was staying at the local hotel and when I said “sí”, said that he worked there too.

Abuelita was the charming grandmother of Tomás who found my walking group wandering in a dried out riverbed and invited us home for a visit.  Abuelita wanted to give me a manicure. Tomás introduced me to santeria … and the topic for another post.

Stay tuned until then.