Surrounded by the natural wonders of BC’s rain forests and wild life, it is easy to appreciate the myths and legends of the First Nations people.

The original inhabitants of the Pacific Northwest relied on oral tradition to record their history and carved totem poles to create a permanent record of  events. Typically the totems were carved from the single trunk of a cedar tree.   Totem artists often speak of a spiritual connection to the original tree.

“When a great tree is chosen for a totem pole or a canoe, there are ceremonies to celebrate the rebirth of the tree into a new existence. These ceremonies reflect our understanding that there is a spiritual connection between man and tree, that we are all aspects of a greater whole, and that the apparent differences between flesh and wood are insignificant compared to the kinship between the spirit of the tree and the spirit of the carver.” (Richard Krentz, Salish artist. Nov 2012).

The city of Duncan aka “City of Totems”,  has one of the world’s largest, outdoor collection of publicly displayed totem poles. They were created in a joint community project with the Quw’utsun’ (Cowichan) people.  Altogether  some forty totems are placed around the city, on land acknowledged as traditional Quw’utsun’ lands. 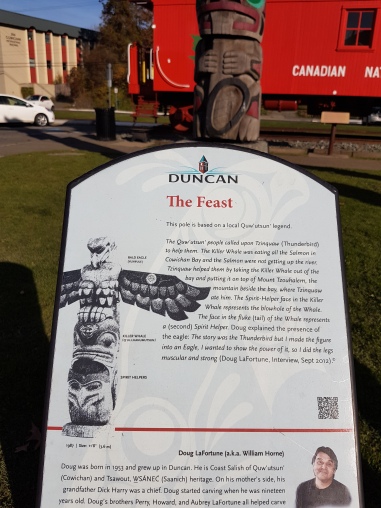 In another city Sooke,  is an artfully painted fiberglass bear “Kody”.

Legend of the Spirit Bear

Kody was part of a  public art initiative and was created by local Sooke artists Gene Sebelius and Bonnie Spencer.  He captures the Kitasoo legend where Raven, who created all living things after the great ice age, went among the bears and turned every tenth bear white as a reminder of the time when the world was pure and clean and covered with ice.

As a point of fact, the Spirit bear does actually exist.

In modern science he is called the  Kermode bear and lives only in British Columbia’s Great Bear Rainforest. He is not related to the polar bear nor is he an albino. He is a Black Bear with a recessive gene that causes about 1 in 10 bears to be white. Families of these bears can consist of both black and white bears.

A wonderful meet up  of myth and science, history and life, coming together in art.

Made only in Canada.