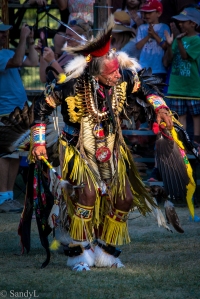 The first time I attended a Pow Wow it wasn’t even a Pow Wow.  It was a Native American concert with time carved out for a traditional and fancy shawl dance demonstration. Lakota rapper Frank Wahn was the headline feature but the highlight for me were the dance performances. I’ve since attended larger and more official Pow Wows.  Every time, just like the first time, I am impressed by their color and pageantry.

There’s something spectacular about a Pow Wow.  It begins with the Grand Entry when distinguished elders, veterans and leaders of the community enter the circle with the Eagle Staff.  They’re followed by a parade of all the inter tribal participants. Over the PA system the MC announces the entrants and the participants dance to the rhythmic beat of the drum singers.   It’s all very exciting and well …grand.

Modern day Pow Wows are a way to preserve the rich heritage of the North American Indian tribes and in many cases, include elaborate demonstrations and contests for dance and song performances. 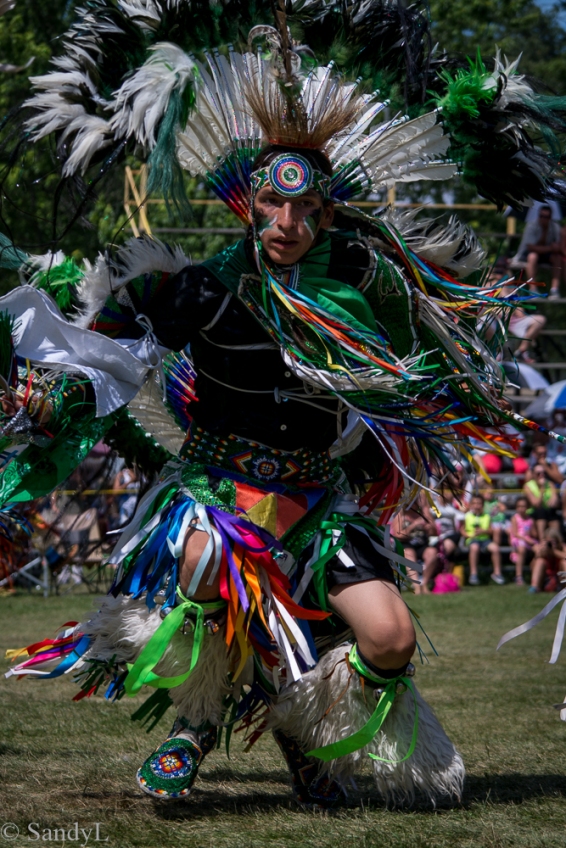 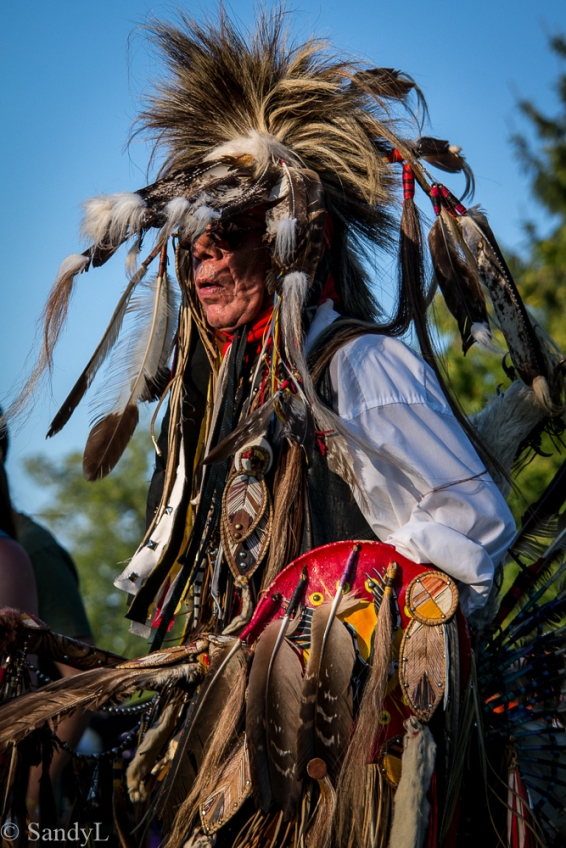 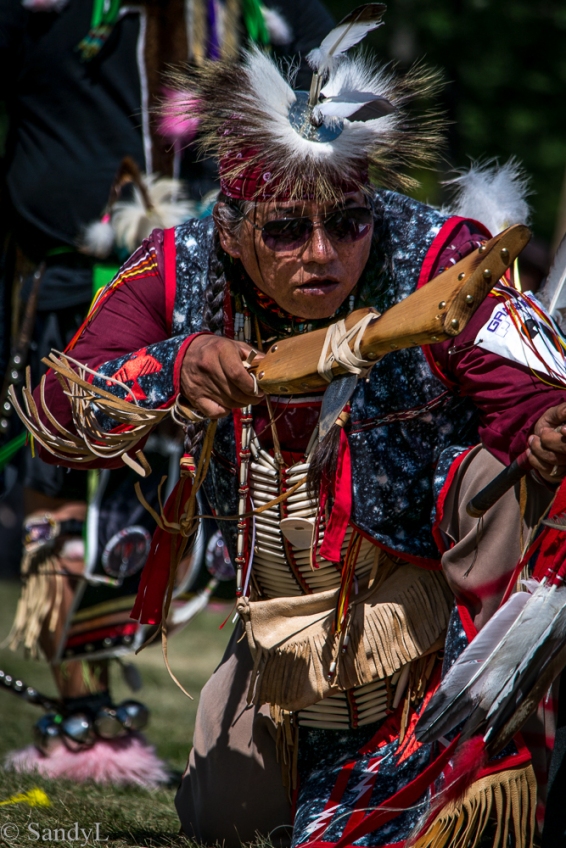 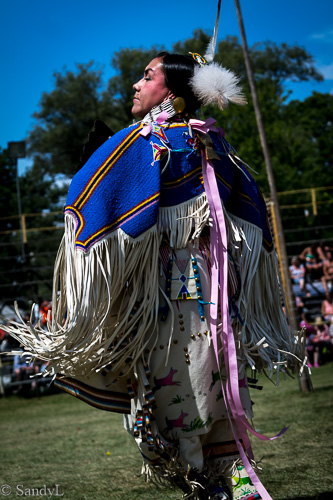 In the summer months there’s a regular roster of Pow Wows throughout Canada and US.  When I attended my first pow wow, it was relatively low key with most of the spectators visiting from surrounding areas and reservations. This year I noticed an increase in the number of tourists and international languages peppering the crowds.   Modern day intrusions, like unabashed selfie takers and intrusive drone cameras (!) have become distractions. Thankfully, they are still minor in occurrence.

Generally performers are friendly and amenable to posing for pictures (with permission) and talking about their regalia.  I met Brittney Shki-Giizis who gave me background on her outfit and close-up pictures of her dress.

Called ‘regalia’,  Brittney’s outfit had sewn-in symbols of her tribe and clan; flowers for the Ojibwe tribe and her crow ‘helper’ from the Marten clan. The outfit was all handmade, intricately embroidered with millions of tiny beads.  It’s no wonder that her dress cost thousands of dollars to make. 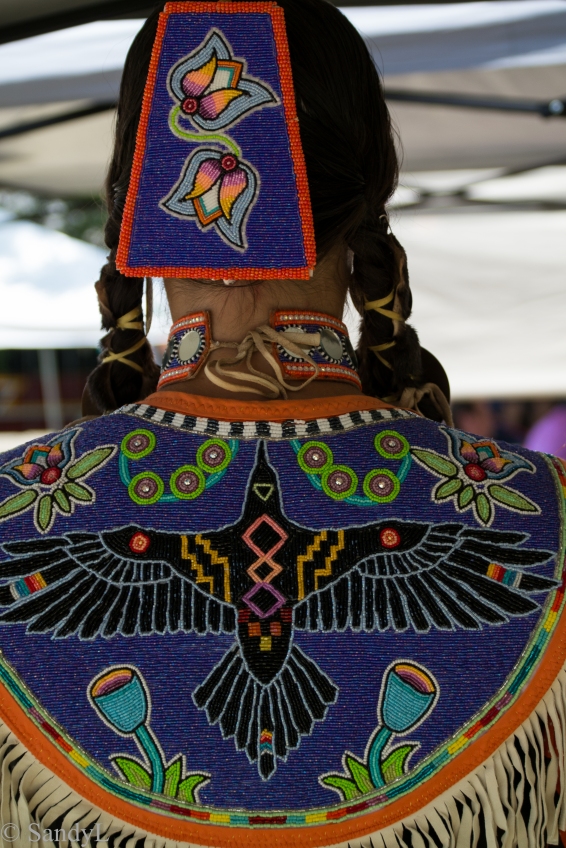 Crow for the Blackbird clan 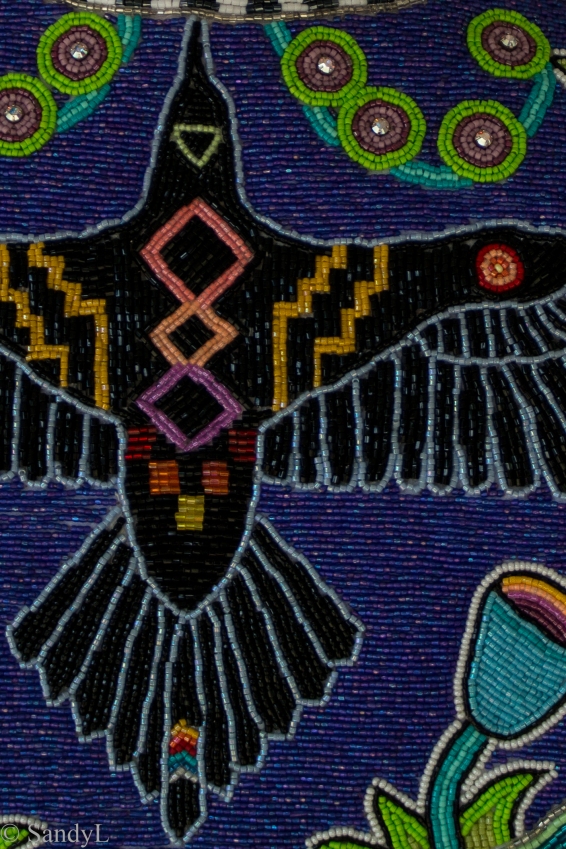 Brittney is also an avid vblogger and her Youtube channel gives a fascinating look at Pow Wows, in front and behind the scenes.  Check out her vlog entry here for the Six Nations Pow Wow where we met … and yes, I agree with her: it was a sweltering 40 degrees and the paparazzi like spectators were embarrassingly aggressive in taking pictures.  Hopefully, she doesn’t remember me as one of them.

For more pictures on Pow Wows see my Flickr album Native American Pow Wows and for more information about Pow Wows in general have a look at http://www.powwows.com/what-is-a-pow-wow/#ixzz4K3IWiwHO