Whenever I travel I take photographs.  Whatever I photograph I invariably prefer the shots of people. In a recent trip to Laos, these are the photos that I favoured the most.

Although northern Laos is mostly mountain side and green, the villages and inhabited areas are stripped bare to the ground.   Footpaths and passage-ways are made of packed earth and mineral rich dust paints everything a dull red brown.  Flashes of colour from costume and clothing are a welcome relief. 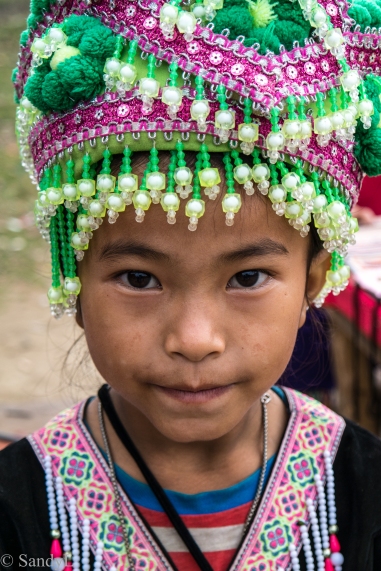 Most of the houses in the  hill villages are made of weathered wooden planks or woven bamboo walls.  On the way to Phonsavon we visited a Khmu village which had a house  freshly painted in vivid purple and brilliant blue.  This young fellow was minding his siblings but he obligingly posed for me.

Our guide Vong, said that school is mandatory and as we drove through the regions of Vientiane and Luang Prabang,  we certainly saw a lot of schools and teacher colleges.  In the remote hill areas though, I suspect the schools are not as accessible.  We saw young kids taking care of even younger kids while their parents worked in the rice fields.   At barely seven years old, this little girl was carrying her baby brother while all the other kids were at play.

Kids grow up earlier here. According to Vong, the Hmong kids even earlier. We stopped at a Hmong village selling hand-embroidered textiles.  Girls dressed in traditional costume posed for pictures and encouraged us to buy. This young girl, who looks about thirteen, would be married in the next year.  Thereafter Vong said, she’d have babies of her own to look after.

Despite my photo collection, Laos is not entirely inhabited by children. Although, with a median age of 19 years, Laos does have the youngest population in all of  South East Asia. Less than 4% of the population is over 65. This has more to do with Laos history than its average life expectancy,  which is 62 years. To prove my point, here is my final and favorite shot.

An elf of an old man was sitting in a huge chair staring at the farang (foreigners) passing by. When I clackered the wooden cow bells at his stall, he hurried over to show his collection of traditional Lao medicine – snakes and scorpions preserved in rice whiskey.  I didn’t buy his medicine but I did treasure his picture.